The Villages of the High Road 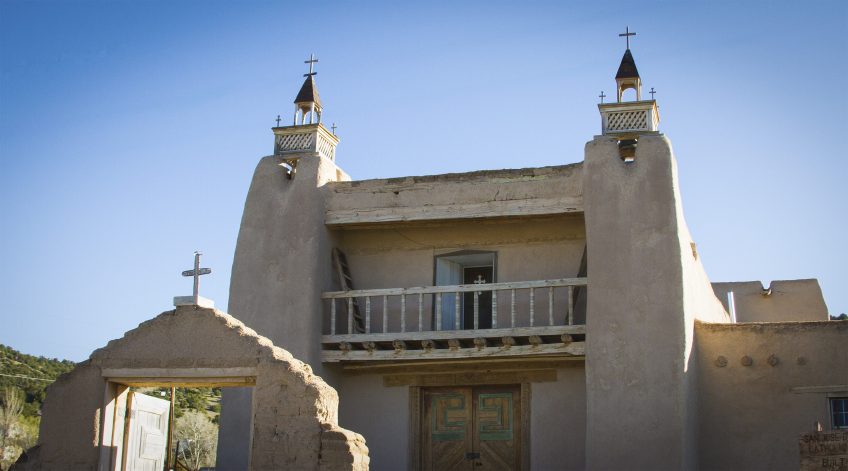 Built between 1811 and 1814, the Santuario de Chimayó is beloved by people of all faiths. During Easter week, tens of thousands of pilgrims come from all over the United States and Mexico in search of healing and miracles. Notice the original reredosor paintings of saints on wooden slabs propped against the walls. These were done by some of the most famous santeros (“painters of saints”) in New Mexico. Be sure to get a bit of sacred dirt from the posito (“little well”) in a room to the left of the main altar. It is said to bring miracles.

Also be sure to visit the little shops in the vicinity of the Santuario. The food at Leona’s is wonderful, and there are some delightful little galleries.

There is also another chapel, the Santo Niño Chapel. In 1857, Severiano Medina traveled to the shrine of the Santo Niño de Atocha in Mexico and brought back a statue to Chimayó. He built a chapel in honor of the Santo Niño near the Santuario. It remained a private chapel until recently, when the Catholic Church took it over and renovated it. Most of the art inside is new but exquisitely crafted. The Santo Niño is said to go about at night performing miracles and wearing out his little shoes, so visitors bring him baby shoes.

A little further on, you will come to the Rancho de Chimayó Restaurante famous for its lovely, old building and Northern New Mexico food. Chimayó was founded when the Spanish returned after the Pueblo Revolt, bringing many new colonists from Mexico. Originally the settlement centered around a fortified plaza, the Plaza del Cerro. The Spanish dug acequias (irrigation canals), built adobe homes, and raised crops and farm animals. They also began a centuries-old tradition of weaving, still maintained in Chimayo by some of the original families. Visit some of the weaving shops to see them in action using the huge old looms.

State Road 98 ends at the junction with SR 76. You may wish to turn left and visit more of the artists’ galleries and studios in Chimayó, but to continue on the High Road, turn right and begin the climb into the beautiful Sangre de Cristo Mountains and the little villages that house the artists of the High Road.

Resources for Chimayó and Cundiyó:

The colony of Truchas was established by a royal land grant in 1754 with settlers from Chimayó and Santa Cruz (near Española). It purpose was to create a buffer between other Spanish settlements and the nomadic Apache and Comanche bands who often raided both Spanish villages and Indian pueblos. Hence, it was built as a walled compound around a plaza.

The courageous and hardy settlers of Truchas hand-dug miles of acequias (irrigation ditches) to bring water from the trout-filled river that gave the town its name (Río de las Truchas means “river of trout”). Although today’s residents still work their farms, many also commute to jobs in Santa Fe or Los Alamos. A few still make their living as traditional craftspeople alongside the many outstanding Anglo artists and galleries that have been drawn to Truchas and its magnificent mountain views.

State Road 76 turns left as you enter Truchas, but first, go straight into the village on County Road 75. Here are numerous galleries, open studios, and a community site showing the work of several artists. After you’ve “done” this part of Truchas, go back, take the turn made by SR 76 toward Taos, and meander among more galleries on your way to Ojo Sarco.

Ojo Sarco is believed to be named for a spring in a nearby cañada. The name was sometimes spelled Ojo Zarco. “Ojo” means “spring” and “zarco” means “light blue”. Look for the well-known Ojo Sarco Pottery Studio and several other galleries in Ojo Sarco.

Continue on to Las Trampas founded in 1751 by a royal land grant, entitled Santo Tomás Apostol del Río de las Trampas (“Saint Thomas, Apostle of the River of Traps”). Despite the heavy toll taken by a smallpox epidemic and raids by Plains Indians, the village survived and the settlers managed to build the magnificent San José de Gracia Church completed in 1776.

As you leave Las Trampas, on the right is an old Spanish aqueduct with a wooden flume, or canoa (“canoe”), still in use as part of the acequia system, which still brings waters to the fields and pastures of Las Trampas.

The next village on SR 76 is Chamisal. It, too, was settled by Spanish villagers moving out from Las Trampas; all of these villages lie within the Las Trampas land grant. Chamisal is named for the “chamisa” shrub (rabbitbrush) which turns golden in late summer. Chamisal Creek flows northwest to join the Peñasco River, which is named for the village of Peñasco.

When Spanish explorer Don Juan de Oñate arrived in this area, he called the people “pikuria”—those who paint. Before the Spanish came, Picurís Pueblo was one of the largest and most powerful of the pueblos, located at the confluence of two rivers and on a major pass that leads through the mountains to the Great Plains in the east. This strategic location made it a key site for trade with the Apaches, but once the Comanches arrived and the Spanish brought horses, the pueblo became vulnerable to attack. The fierce Picurís continued to fight the Spanish even after the Reconquest, and lost many members of the tribe as a result.

Like Taos, Picurís is a Tiwa pueblo. Picurís today, while small, has a thriving buffalo herd and runs the lovely Hotel Santa Fe in Santa Fe. It is known for its gold-hued micaceous pottery (featuring flecks of shiny mica). When the 200-year-old San Lorenzo de Picuris church collapsed in 1989 due to water damage, pueblo members rebuilt it by hand. San Lorenzo Feast Day is August 10. Please get permission before taking photos anywhere on the pueblo.

Return to State Road 75 and follow it back into Peñasco. Today the town of Peñasco serves residents in the many charming villages and rural areas surrounding it, as well as the residents of Picurís Pueblo. It offers several art galleries and the Sugar Nymphs Bistro, featured in Gourmet magazine as one of the country’s best restaurants. This is also where you will find the Penasco Theatre, home of Wise Fools New Mexico, providing various forms of performance art, including a circus!

Penasco also provides other “modern” conveniences, like gas stations, eateries, food stores, and a post office. This village is truly a mixture of old and new, action and rest, art and life. Leaving Peñasco, the road makes a wide curve to the left, but keep going straight to take State Road 73 into a beautiful river valley flanked by steep mesas and the Llanos.

Resources for Picuris and Penasco:

The villages of Llano San Juan, Llano Largo, and Santa Barbara in the Peñasco area were first settled by Spanish colonists in 1796, the same year as Taos. The definition of a “llano” is a “broad, treeless plain,” but Llano San Juan and Llano de La Yegua are charming, lush green valleys. (They can be seen as green jewels even from a great distance on Google Earth or Google Maps satellite view.) They encapsulate the charm of all of the New Mexico High Road villages: old adobes, grazing horses, golden meadows, wildflowers, vestiges of a centuries-old way of life.

Go back the way you came, toward Peñasco, and at the stop sign take a right turn back onto SR 75 and continue the scenic drive toward Vadito.

Vadito means “little ford.” There is not much of a town; most of the homes and farms of this rural community follow the river valley on both sides of the road. Forest Road 469, on the north side of the road, branches off into Forest Road 3, which is part of the old Spanish Camino Real or “Royal Road.”

Beyond Vadito, enjoy the drive through the lovely valley of Placita. At the “stone wall” intersection, the High Road turns left onto State Road 518 to Ranchos de Taos.